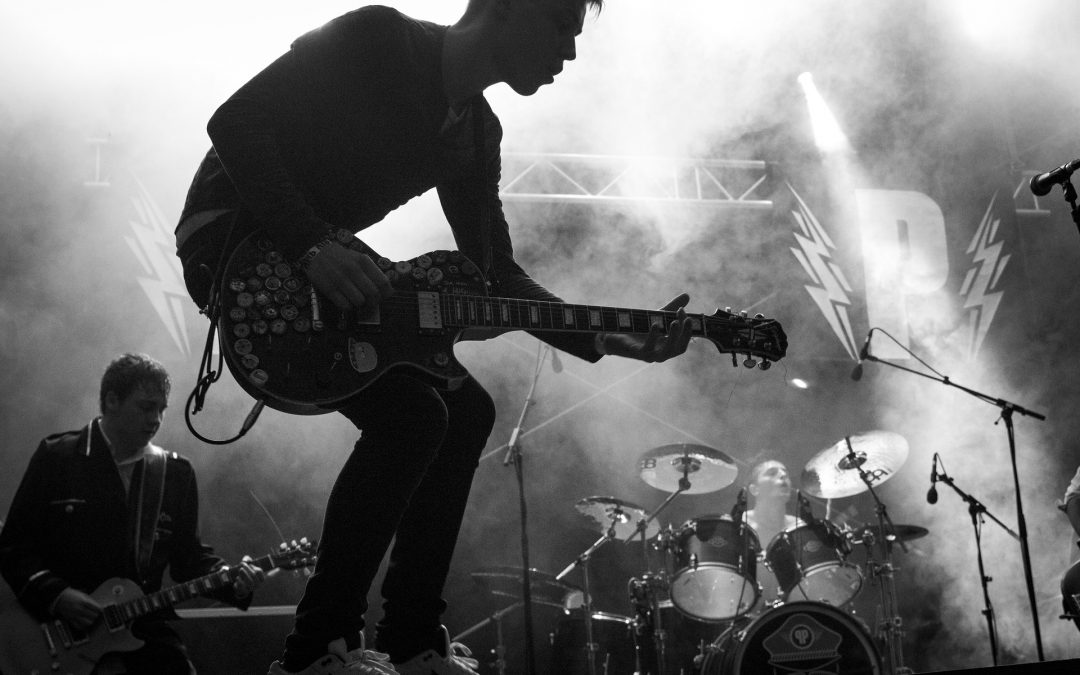 If you’re below the age of 35 – and maybe even if you’re not – you’ve probably been told at least 734 times that you should follow your dreams.

And that’s great. It’s great to have aspirations. It’s important to aim high. And it’s essential – if you want to live a life worth living – to go after the things you want.

But that’s only part of the story.

And that’s the deal with becoming a professional songwriter – with deciding to try make a living from what you write.

And sure, I get what it’s like to let your dreams lead the way. Who wouldn’t love to be paid a f*ckton of cash to make stuff up? Who wouldn’t want to imagine themselves collaborating with Quincy Jones or Skrillex or Diane Warren? Who doesn’t want to fantasize about writing that one song everyone is listening to, while they sit back sipping mimosas in the Bahamas and watching the royalties roll in? 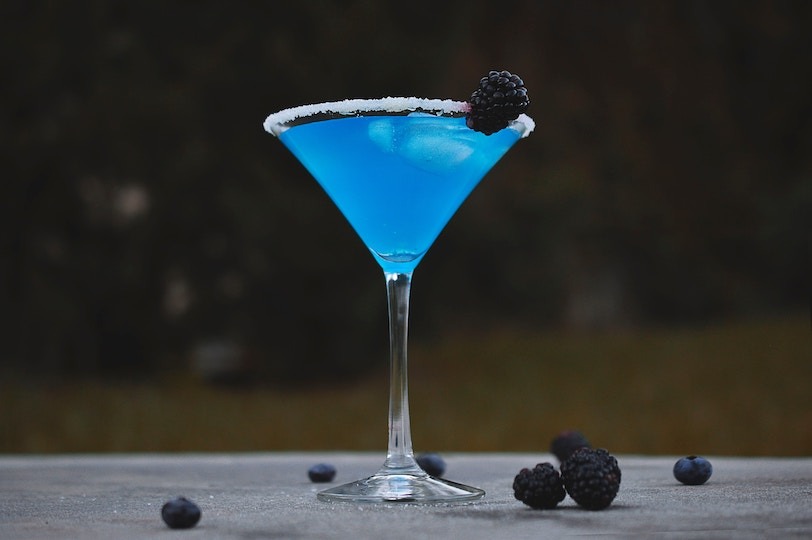 This is a martini, but whatever.

But for the majority of songwriters – and musicians in general – that’s exactly what those things are: fantasies.

The reality for most musicians is that they’re working musicians. They work for pretty average, usually not great, money. Like ‘normal’ people do. But they’re also constantly hustling for new opportunities, working longer and more antisocial hours than most people, and often earning far less than they would in other professions.

The trouble is, the musicians who get 99% of the attention in the media, online and basically everywhere else are the 0.1% or 0.01% – they’re the lottery winners who, through some combination of hard work, luck and persistence, land the big, high-profile, high-paying gigs. So that’s what a lot of people think being a musician is.

And sure, it can be. But for every musician like that, there are a thousand others who are working long hours doing session work, writing jingles for TV and radio and/or teaching guitar to teenagers who are only there because they think it will help get them laid. (No, Brad, there’s more to ‘playing guitar’ than taking one Instagram picture with your new Stratocaster.)

But seriously, that’s the nature of most careers in the arts – most people are at one of two extremes: struggling or thriving. The Internet has evened things out a bit, but only a bit – most artists are still either just getting by, or they could take the next six months or six years off on vacation if they wanted to. As the saying goes, you can’t make a living in the arts, but you can make a killing.

But there’s good news – things can change. And they do. New artists get their break. Struggling songwriters become professional songwriters, just like that. As the other saying goes, musicians spend the best part of a decade making themselves an overnight success.

All that is to say, becoming an artist purely because you think it’ll be great for your bank balance is about as good an idea as investing all of your money in the lottery because you’re feeling lucky this week:

Sure, you might decide to become a professional songwriter today and strike gold tomorrow. Or you might not. In fact, a good rule of thumb is that building a stable career as an artist takes anywhere from five to ten years – sometimes more, sometimes less, but that’s the ballpark.

So why do people do it? Because of the potential rewards? Maybe. But also because it’s more important to them than anything else. But also because creativity, self-expression, a chance to change the world are more important to them than anything else. Because it makes people think you’re cool, because it’s a cool thing to do when you wake up everyday, because artists don’t get the stability and security ‘normal’ people get but they get to feel a bit more alive than everyone else.

That brings us to the one question you can ask yourself to figure out where this leaves you:

Is being a songwriter the most important thing in your life?

In other words, is there something else you can see yourself doing with your life? In which case, great, you should do that. And write as much as you can on the side. Who knows, things might take off for you anyway.

But if there isn’t anything else you can see yourself doing with your life, that’s also great. Then you should pour everything you’ve got into building a career as a professional songwriter. You should give yourself the biggest chances of succeeding. And you should buckle up, because goddamn it, it’s going to be a ride.

That single, simple question is so important because that’s how sacrifice works – either it’s worth it or it isn’t. And it’s only worth it if the positives you get outweigh the negatives that come with them. Putting up with bad shit without a reason to isn’t sacrifice, it’s masochism. But putting up with bad shit when it’s going to get you some amazing shit is purpose, it’s grit, it’s having the foresight to trade short-term pain for long-term benefit.

And because the pros and cons that come with what you decide to do with your life aren’t something you can measure or quantify – other than your bank balance, which is a dumb way to measure your self-worth – only you can decide if it’s worth it. Not your parents. Not your guidance counsellor. Not society, whatever that means.

Lots of people assume that the world of professional songwriting is filled with people who are better, or more talented than everyone else. That that’s the test you have to pass to be allowed entry, then you’re done.

But it’s not true. It doesn’t work like that. I have friends who are lawyers, teachers or recruiters who are easily as talented, smart, and musical as tons of my professional musician friends.

The difference is grit and persistence – how willing you are to keep going through all the rejection, disappointment and insecurity while you establish yourself as a professional songwriter. You have to really want it – more than anything else – and enough to stick at it. Otherwise it doesn’t work. 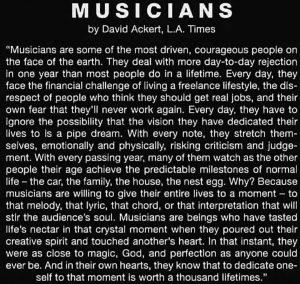 That’s been true of my career in the six or so years I’ve been pursuing this full time, 100%. On the surface, my life sounds super exciting: I wrote a best-selling book and signed a major film deal before I was thirty. I’ve built one of the Internet’s most popular songwriting sites out of nothing. Having as flexible a schedule as I do, I get to do crazy things like taking a last-minute trip to Cuba because I found a great flight offer or spending a month working remotely in Costa Rica, because why not?

But I also haven’t rented my own long-term apartment for nearly three years, staying in places short-term or with family and friends. My income still goes wildly up and down. I’ve lost count of the things I’ve applied to or pitched for and it hasn’t worked out. I’m still busting my ass trying to grow my business and writing career, six years later. I spend so much time moving around it sometimes feels like I have a long-distance relationship with every one of my friends.

And for now, at least, it’s worth it. The benefits of being able to build and live the life I want to outweighs the sacrifices I have to make to be able to do that. And things get better and better – and more stable – the longer I do this. So no regrets. And, unless one day I wake up and have a massive change of heart, I’m here for good.

That’s the truth about being a professional musician. You feel like there’s a calling, sure. But you also decide to accept that call – and everything that comes with it.

I know that’s not the answer a lot of people want to hear. I know people who write for sites like this one are supposed to tell you to follow your dreams no matter what. (Or worse, promise you a quick route to your dreams in exchange for plenty of cash.) But I’d rather give you the truth so whether you decide to become a professional songwriter or write just for fun, you can make your best decision.

It all comes down to ‘is it worth it?’. For you. No one else. And if you change your mind, you can change your plans. There’s zero truth to the idea you have to have ‘made it’ by 30, or that you can’t even get started in your 50s or 60s. There’s just giving becoming a professional songwriter a shot, sticking it out and seeing where it takes you. Or deciding that’s not for you and doing something else instead. It’s as simple as that.

Whatever you decide – to give this everything you’ve got and accept the sacrifices that comes with it, write on the side and see what happens, or something in between – congratulations. As long as it’s what you want, it’s the right choice for you.